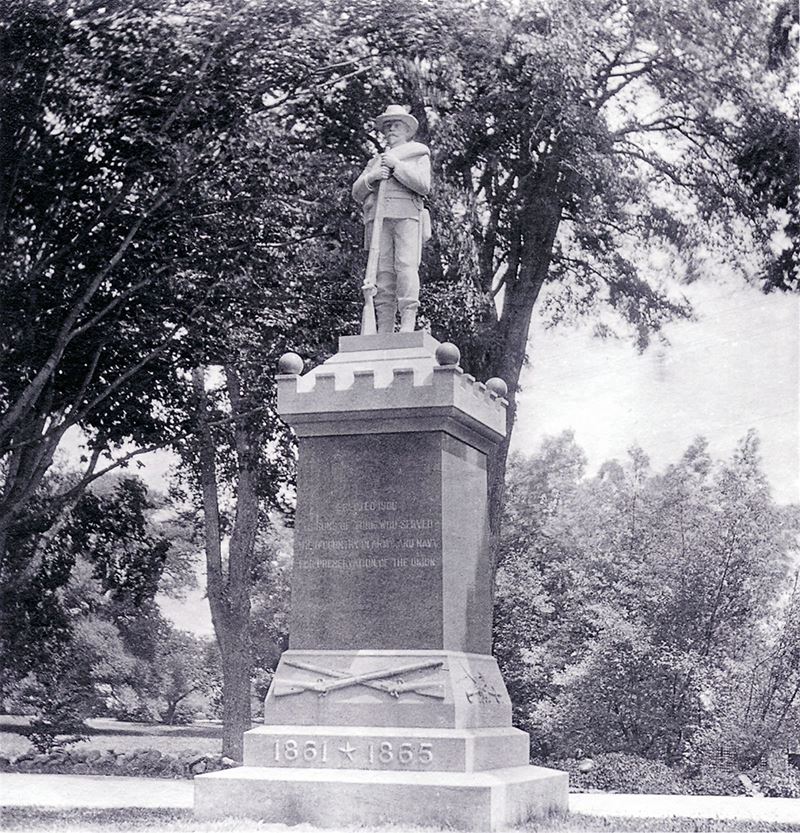 This is the Soldiers’ Monument at the triangle formed by the intersection of Route 1A and Long Sands Road, known in the nineteenth century as “the Parade.” This Monument was dedicated in 1906 and depicts a correctly dressed, Army infantryman of the Spanish American War. This view, taken shortly after it was erected, shows the originally bucolic background of the monument, later replaced with commercial structures in the twentieth century.

From the Old York Transcript & Courant May 1911 Memorial Day edition we find this tribute: “No town in the country could have a better place for a site for a monument of this kind. The monument committee wanted to have an original statue not a shop worn design.”

“The traditional beliefs, customs, and stories of a community, passed through the generations by word of mouth.” The folk lore surrounding the Soldiers’ Monument goes something like this:

“The granite sculpture on top of this monument is dressed in a Confederate soldier’s uniform because there was a shipping error and our monument was sent down South somewhere so we got a Confederate soldier instead. Efforts to exchange the monuments never came to pass. The belt buckle has “CSA” on it signifying Confederate States of America. “

This tall tale has been written about, spread via published books, word of mouth and now the internet. The carved text on the center polished section (the die) reads: “Erected in 1906 To Sons of York who served their country in Army and Navy for preservation of the Union.” To the lore monger, this means only that the statues were mixed up and not the whole monument.

When famed historian Col. Charles Edward Banks (1854-1931) was working on his History Of York Maine, he wrote that the only York resident survivor of the Civil War known to him at that time (1931) was Captain John Dennett (1843-1933). Captain Dennett lived within sight of the monument and was quite elderly at that time. He also was the keeper of the ledger that was transcribed for this history of that monument. The following long sentence from page 426 of the Banks book reveals what might be the beginning of the folk lore.

“As visible evidence of the town’s grateful appreciation of the services of her sons on the field of battle, and the service of the survivors, a handsome monument to their memory graces the Town Square, surmounted by a statue of a soldier shown in the uniform with the accoutrements of the Army of the Union.”

Even credible historians make mistakes and Banks was no exception. No members of the Soldiers’ Monument Committee were left alive to read, let alone correct his writing and his interpretation of the statue’s uniform was incorrect. Union infantry soldiers did not dress like our statue’s soldier.

Most people have thin knowledge of American military uniforms during this time period and we humans have an interesting ability to make up answers for things not understood. Perhaps it is a desire to get closure on situations beyond our immediate comprehension.

The author and transcribers hope the information in this booklet answers questions for some and raises questions for those among us who are driven to seek more. Good luck and don’t forget us when you find something interesting.- From The Soldiers' Monument by Michael Dow